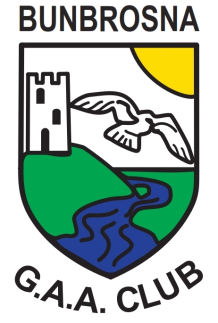 Published: about 4 years ago

There was a large attendance at our AGM held last week in Tormey’s of Bunbrosna The Chairman, Martin Tormey in his address outlined a positive year and looked forward with renewed hope for the coming year. He thanked everybody who had helped out at the club in any way over the past year especially our outgoing manager Niall Spain and he welcomed Cormac Davey on board as our manager for the 2019 season.He paid tribute to the players for their commitment throughout the year He thanked the Lotto committee for their tireless work and the Grounds Committee who worked so hard to have the grounds looking its best throughout the year.The Chairman on behalf of all the club expressed appreciation and gratitude to all of our sponsors and to those who had contributed in any way to the Club finances over the year.There was a minute’s silence as a mark of respect for those who had passed away in the past year and the Chairman wished those who were ill a very speedy recovery. Hughie Tormey was thanked for making his premises available to the club all through the year.

The Chairman welcomed the formation of the Rounders club in the past year and paid tribute to the hard working committee. It was very pleasing to see the club develop and progressthroughout the year.

In his address the outgoing secretary, Pádraig Flynn thanked everybody who had helped him fulfil his duties as Secretary over the past few years. He commended the excellent work being done with UnderAge and Scór in recent times and he outlined the many successes that had been achieved over the past year .Pádraig has stepped down as Club Secretary in order to concentrate on his work with the UnderAge committee . The meeting was loud in its praise for the work that Pádraig had done as Club Secretary

In his address the Club Treasurer Aidan Finnan presented a very healthy set of accounts to the members in a most professional form. The Treasurer stressed the importance of paid up membership in the finances of the club and explained in detail how this money was used . This year’s membership is now due and can be paid to any committee member.

A full list of officers will be published next week.

A new app is available containing all the news from the club It is called Clubify and we recommend that it be downloaded from the app store. When downloaded follow instructions and link with Bunbrosna GAA. All club activity will be posted and you can even play the Club Lotto from the app.

No winners of Club Lotto on Wednesday night last Numbers drawn were 3,19,24&28. There were two Match 3 winners Paul Tormey and Paddy Mc Cormack Sellers prize went to Jimmy Mc Cormack. The next draw will be in Connaughton’s on February 6th and the Jackpot is now €8000

The AGM of the Rounders club will be held in the old clubhouse on Thursday next Jan 31st at 8 .30pm. All are most welcome and new players are especially welcome for all of our teams.

All at Bunbrosna GAA were deeply saddened to learn of the...