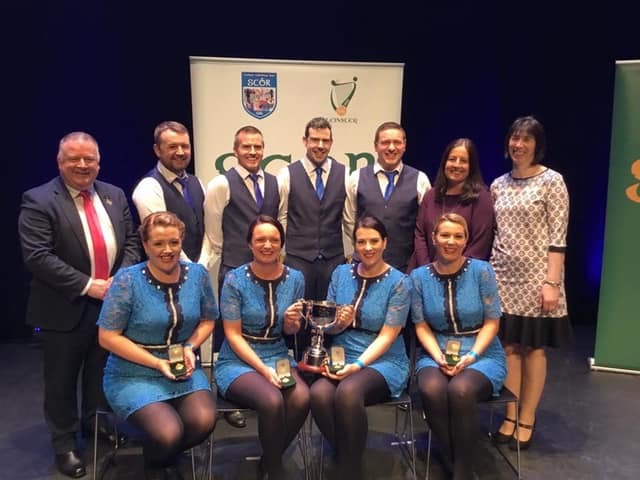 Published: over 3 years ago

The wonderful Bunbrosna Scór Set Dancers have done it again! They have been crowned Leinster Champions 2019 in Wexford’s Opera House . Heartiest congratulations to everybody concerned in making this a very special victory in our 50th anniversary year. We eagerly await the All Ireland Finals when the Bun machine will hit the road again !

Bun played their second league game away to Moate last Sunday morning. Conditions were difficult for both sides with a strong wind having a big role to play. Despite playing some good controlled football against the wind, we went into Half Time 10 points down. A determined and hard working second half saw us earn a valuable point. A superbly taken goal by Gavin Lyons in the second half was crucial to this recovery .Our second goal could best be described as a joint effort from Aidan Finnan and Brian Maguire with both contributing to its final journey to the back of the net.

The entire team and management deserve great credit for turning this around on what was a difficult morning for football. We play Kilbeggan Shamrocks in Round 3 in two weeks time.

Last week end we were fortunate enough to be involved in the excitement of All Ireland Schools championships when we were asked to host the All Ireland Post Primary Junior Camogie Final between Scoil Pol, Kilfinane, Co Limerick and St Colm’s High School,from Derry. This was the first time that either school had reached the All Ireland Final so there was great excitement and a huge crowd of supporters came along for the match.It was a rare sight to see seven coaches parked on the road outside our pitch.

This was a keenly contested final with only a point between the sides at Half Time. Two late goals for Scoil Pól saw the Limerick side victorious on a scoreline of 3:06 to 1:03.

Well done to both sides on a highly entertaining game. We would like to complement both schools on the pleasant behaviour of both their teams and the large crowd of students who came along on the day to support their teams. Despite the coldness of the day and the very early start that morning their behaviour was exemplary and a credit to all concerned.

Thanks also to everybody who helped out on the day at very short notice. A special thank you to Mary Finnan and Valerie Molloy who provided welcome cups of tea and home baking to all. It was most appreciated !

Heartiest congratulations to Amy O Dwyer and Pádraig Walsh who announced their engagement recently . We wish the happy couple all the very best in the future.