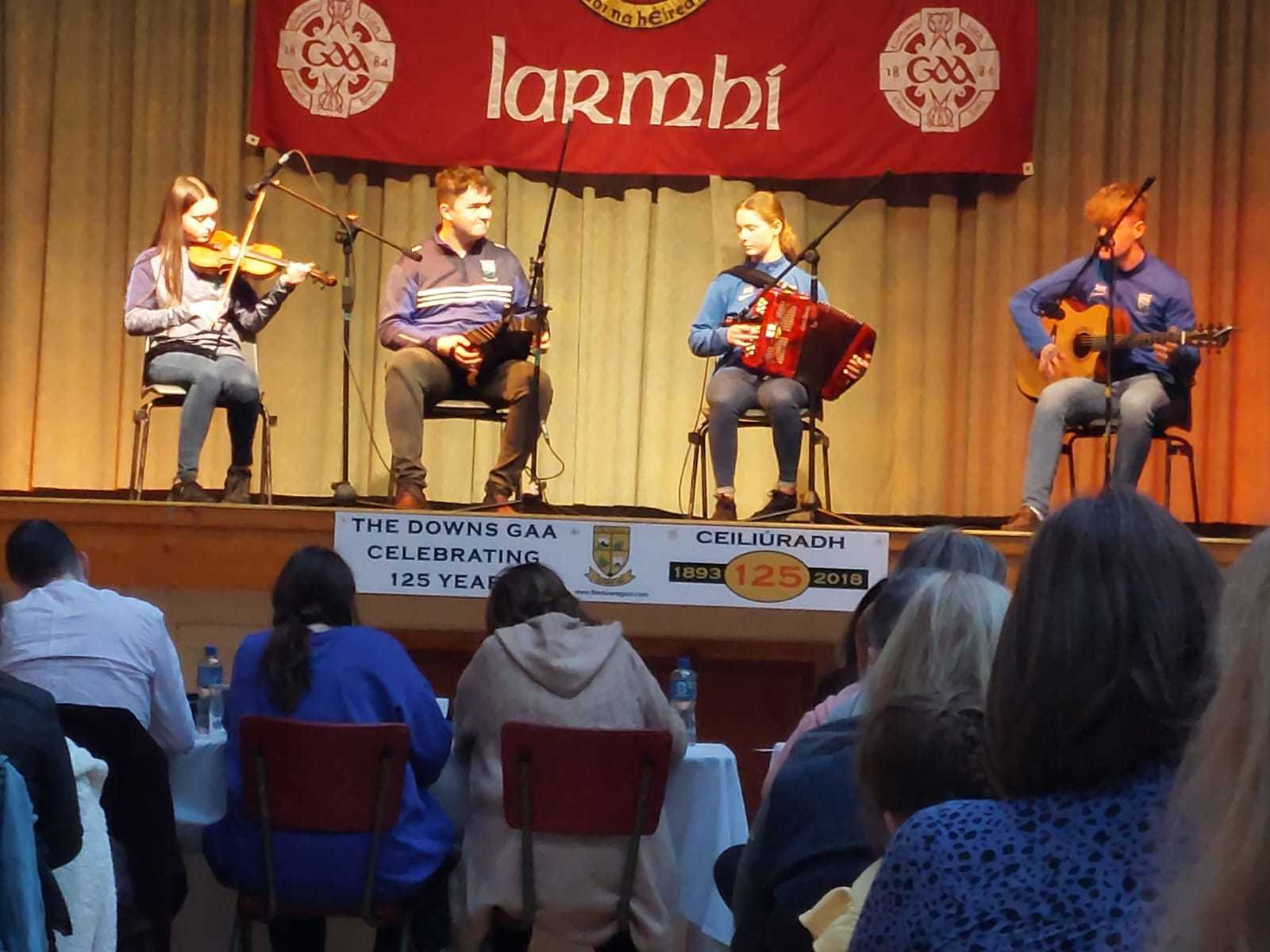 Well done to our very talented musicians who won the Instrumental County Title in Scór na nÓg on Sunday evening in The Downs.

On Saturday last we made the short trip to Ballynacargy to take on the home side in our first game of Division 6. Played in difficult conditions both sides served up an entertaining game nonetheless with Ballynacargy edging out the game with a goal in the last couple of minutes to win on a scoreline of 2:05 to 1:05.

Ballynacargy raced into an early lead with 1-1 in the first 10 minutes of play. Bun got to grips with their opponents after this and started putting some fine passages of play together. Brian Maguire got on the end of two long balls into the danger zone and punched them over the bar.

The full back line of Eoghan Murray, Davy Newman & Eoin McGowan made some outstanding interceptions and this gave a huge lift to the rest of the team. Luke Kiernan drove the team on from centre back and was ably assisted by his wing backs in Matthew Hope and Ger Brennan.

Our midfielders and forwards worked very hard and tackled tenaciously to turn over possession and Cian Tighe scored two fine points from frees to see us trailing by one point at half time.

The second half saw conditions worsen but still both teams delivered some fine passages of play. Cian Tighe kicked a huge free against the wind. Padraig Keenan and Daniel Bishop ran themselves ragged tackling back and putting their opponents under pressure. Patryk Kupferschmidt and Conor Lyons combined well before Lyons was fouled in the square. Cian Tighe dispatched the penalty from the rebound and saw us take the lead for the first time with 5 minutes to play.

To their credit, Ballynacargy did not panic and drew level from a free before a long ball into the square saw them pick up the breaking ball to fire to the net and record a 3 point win.

While we are disappointed with the defeat, Bun put in a tremendous effort and worked extremely hard to the final whistle. With this sustained effort, the results will follow.

Our Adult team has two fixtures coming up this week. On St. Patrick’s Day we travel to Springfield to take on Mullingar Shamrocks in Division 3 of the league. Throw in is at 11:30am.

On Sunday next we take on Milltown in Division 6 of the league. Throw in at Bun is at 11:30am.

As the new season is upon us, Rounders training will start on Saturday next 26th February. Over 17s will be at 5:00pm while U17s will train at 6:00pm. New members are welcome for both age groups.

On Saturday we welcomed back our underage academy in what was a very positive start to the year.

We had 60 children at training, who enjoyed the use of both the Astro and pitch. There was great help and teas and coffees were available courtesy of Clare Moran and Mary Finnan in the new clubhouse.

Great to see so many new faces as well as welcoming back many familiar players. Well done to all. Training continues every Saturday at 1:00pm.

Inny Shamrocks AGM takes place next Wednesday 16th March 8pm in Ballynacargy. We hope to see a large club representation at this meeting.

Well done to Áine Newman who lined out at wing back for the Westmeath Senior Camogie team on Saturday against Kilkenny in the League. Áine and her team mates put in a spirited performance throughout  but were defeated in the end.

All at Bunbrosna GAA wish to offer our sincere condolences to the Kelly family, Rathowen, on the sad passing of James.

To his brothers, sister, nephews, nieces and extended family and friends we offer our deepest sympathies to you all at this sad time.