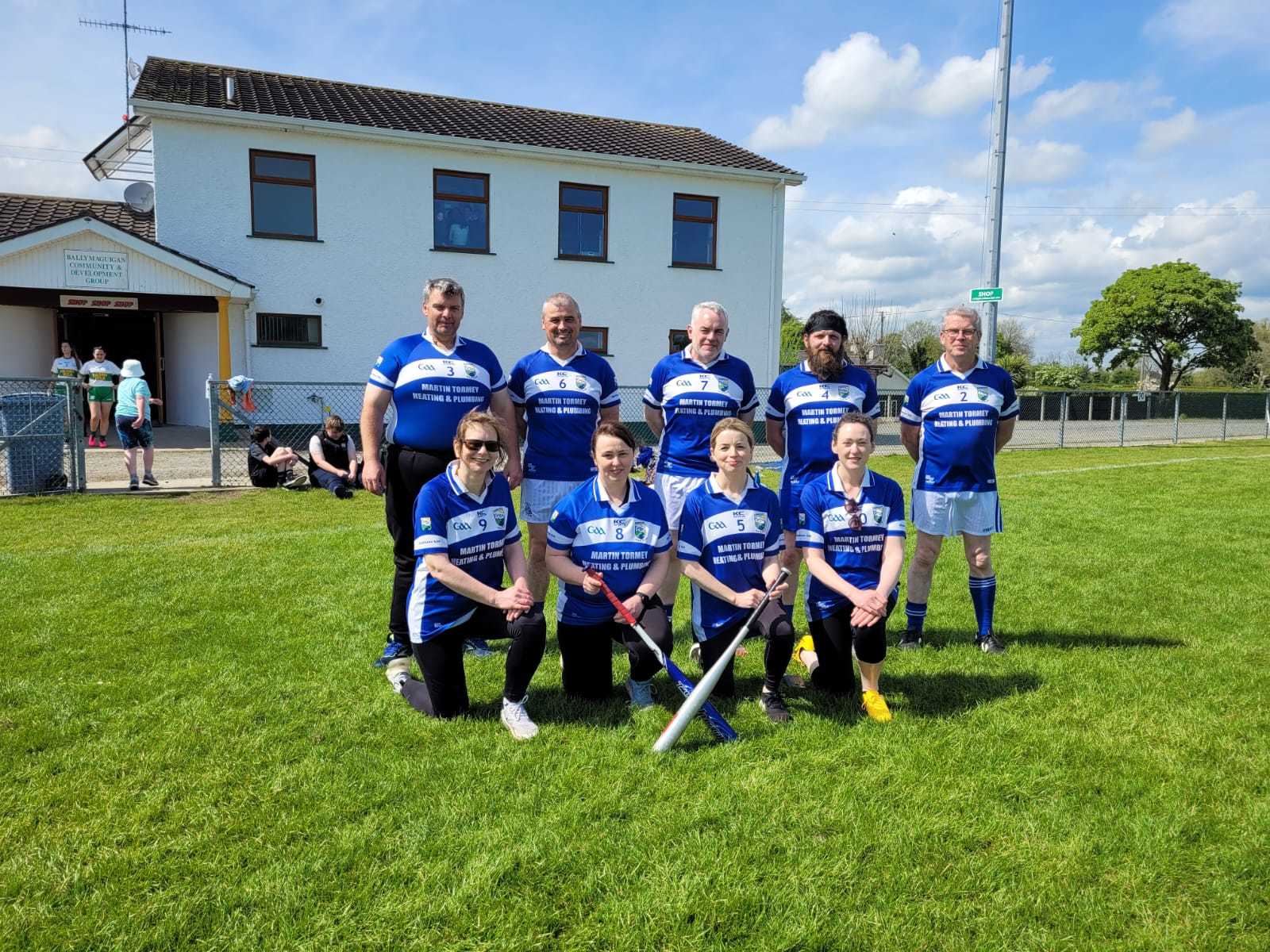 Last Tuesday night our Division 6 team travelled to Tyrrellspass to take on the home side. In what was a very entertaining game of football, Bun recorded an impressive 3-15 to 2-10 victory. Both teams put some excellent passages of play together but ultimately, Bun’s efficiency in front of goals proved to be the difference.

Bun were slow to start in this game and Tyrrellspass were first on the scoreboard with a fine point from play. Bun responded with a point from play from Cian Tighe which was followed soon after by a great score from Noel Yourell.

Caolan Fulham was next on the score sheet for Bun after some good work by Luke Kiernan. Kenny Conroy and Mark Donnelly scored two points from play as Bun started to assert their authority. A flowing move then saw Brian Maguire, Kenny Conroy and Noel Yourell exchange passes to leave Caolan Fulham with a palmed finish to the net in what was a brilliant team goal. Two further Fulham points together with points from Noel Yourell and Mark Donnelly saw Bun lead by 1:09 to 0:04 at Half Time.

The opening 15 minutes of the second half saw Bun dominate their opponents with excellent points from Noel Yourell, two from Kenny Conroy and Mark Donnelly from a mark. A fine team move followed and an excellent lay off from Kenny Conroy released Donnelly to finish to the net.

Tyrrellspass responded with a goal and a point of their own after this to close the gap. Brian O Hara was next on the scoresheet for Bun with an excellent point off his left before another long ball from midfield resulted in a deft knock down from Brian Maguire for Donnelly to finish to the net. Brian Maguire scored what was to be Bun’s last point of the game after yet another brilliant interception from Eoghan Murray in defence.

The final ten minutes of the game saw Bun drop their intensity levels and Tyrrellspass scored 1-4 without reply to close the gap further. While it was disappointing to concede these final scores, this was overall a very impressive performance from Bun. Well done lads.

Finally, we would like to acknowledge referee Barry Nea and his team of umpires. It is great credit to Barry that he arrived with four umpires for a Division 6 league game and it was greatly appreciated by both teams.

A huge well done to our super U8 and U10 girls who made the short trip to Ballynacargy for their second Go-Games Blitz of the season on Saturday morning.

First out in action were our fantastic U10s, who despite missing a few of their regular teammates, performed really well throughout the morning, with matches against Mullingar Shamrocks, Milltown and Ballynacargy.

The Bunbrosna girls worked really hard, both in defence and in attack, where they executed some fantastic attacking movements and scores. The girls can be really proud of all the progress they have made together as a team!

Next up were our terrific U8 team who played three really exciting games against two St.Loman's teams and Milltown. Each girl got the opportunity to try out a few different positions, whilst displaying all their fantastic passing and teamwork skills! A special mention to Lillie who did brilliantly at her first U8 blitz!

A huge thank you to our hosts on the day, Ballynacargy, who did a fantastic job, running a very organised and hugely enjoyable blitz. It was great to see so many girls out playing football and enjoying themselves.

Last Wednesday night saw two Inny Shamrocks teams in action, at U13 and U17 levels.

The U13s travelled to Clonmellon to play St. Paul’s. Both teams were unbeaten in the run up to this game so a close, competitive encounter was anticipated and that’s certainly what we got.

At the final whistle of a great game of end to end football, between two evenly matched teams it was fitting that the final result was a draw. Well done to both teams and management on the very high standard of football.

Our U17s had a home fixture in Ballynacargy v St. Loman’s.  The lads had been unlucky not to get something from the previous two games so were determined to come away from this fixture with a positive result.

That determination showed in the performance with some great football played by the Inny lads to deservedly win on a final score of Inny Shamrocks 2-8, St. Loman’s 2-4.

Well done to each member of the team and coaches Barry Glynn and Darragh Keena who are doing a great job in developing this team. Keep up the good work lads.

Well done to the Inny Shamrocks U15s who had a great win on Friday evening when they took on Millmore Gaels in Ballymore.

The team have been making great progress this season under the guidance of coaches Robert Ruisinger, John Mulligan and Ger Leslie.

With a fair breeze and good sunshine we took to the field at Naomh Trea's Ballymaguigan, Co. Derry for our first match of the season on Sunday. Captain Damien McCormack won the toss and we started fielding.

We took the opposition out quickly with 3 outs in succession due to quick play by Brian Crum as catcher and Marion Lyne and Patricia Tyrell on first and second respectively. The superb fielding continued through into the second innings by both Bunbrosna and Naomh Trea's, where Bunbrosna were first to score with Peter Maguire, Patricia Tyrell and Damien McCormack all getting runs.

Naomh Trea's came back in the 3rd with 4 runs, and getting Bunbrosna out quickly. The 4th inning was very even with Bunbrosna holding Naomh Trea's to just 2 runs and picking up 3 with Patricia Tyrell Damien McCormack and Valerie Molloy all getting runs.

The final innings began with Naomh Trea's putting 5 more runs up and and taking out the required 3 Bunbrosna players to finish the match with a score of 11:6 despite the strong batting of Kevin McGowan and Liz McGovern. Making outfield catches, for Bunbrosna were Declan Forde, Brian Crum, Valerie Molloy and Damien McCormack player of the match who made crucial 5 catches.

Massive thanks to Naomh Trea's who put on a super post match supper and Ref Iain Cheyne who travelled from Ballinalee for the fixture. Finally thank you to the club for organising the transport.

Well done to our U14 girls Rounders Team who took on Na Fianna in Dublin on Saturday evening. There was some great teamwork and excellent outfield catches by Beibhinn McGowan,  Bonnie McCormack and Siobhain Molloy and Katie Tyrell with super batting by Caoimhe  Gavin, Laura Kerrigan, Sarah Tyrell. Added to this was some great base play by Anna Dunleavy and Aoife Dunleavy and Sophie Lyne with Alannah Nally Aine Kiernan.

Against a strong team, our players put in a first class effort and pulled the score back to 19:30. This team has shown impressive improvements since the start of the season and are destined to improve as they continue over the rest of the season.

Thank you to all those who travelled to cheer us on. Finally a massive thanks to Damien McCormack who drove the team today.

We received great news on Friday that we were selected as winners for a new solar system to the value of €10000 from JFW Renewables.  This is fantastic news for our club and will be of great benefit to us now and into the future. We extend our thanks to JFW Renewables and also to Rachel Quinn who entered us into the competition.

All at Bunbrosna GAA wish to offer our sincere condolences to the Halton and Fitzgerald families on the sad passing of Bridie Halton, Trim.

To her brothers Paul and Con, sisters Marie Maher, Bernie McNamee and Anne Fitzgerald, extended family and friends, we offer our deepest sympathies to you all at this time.

No winner of Club Lotto on Sunday. Numbers drawn were 3, ...