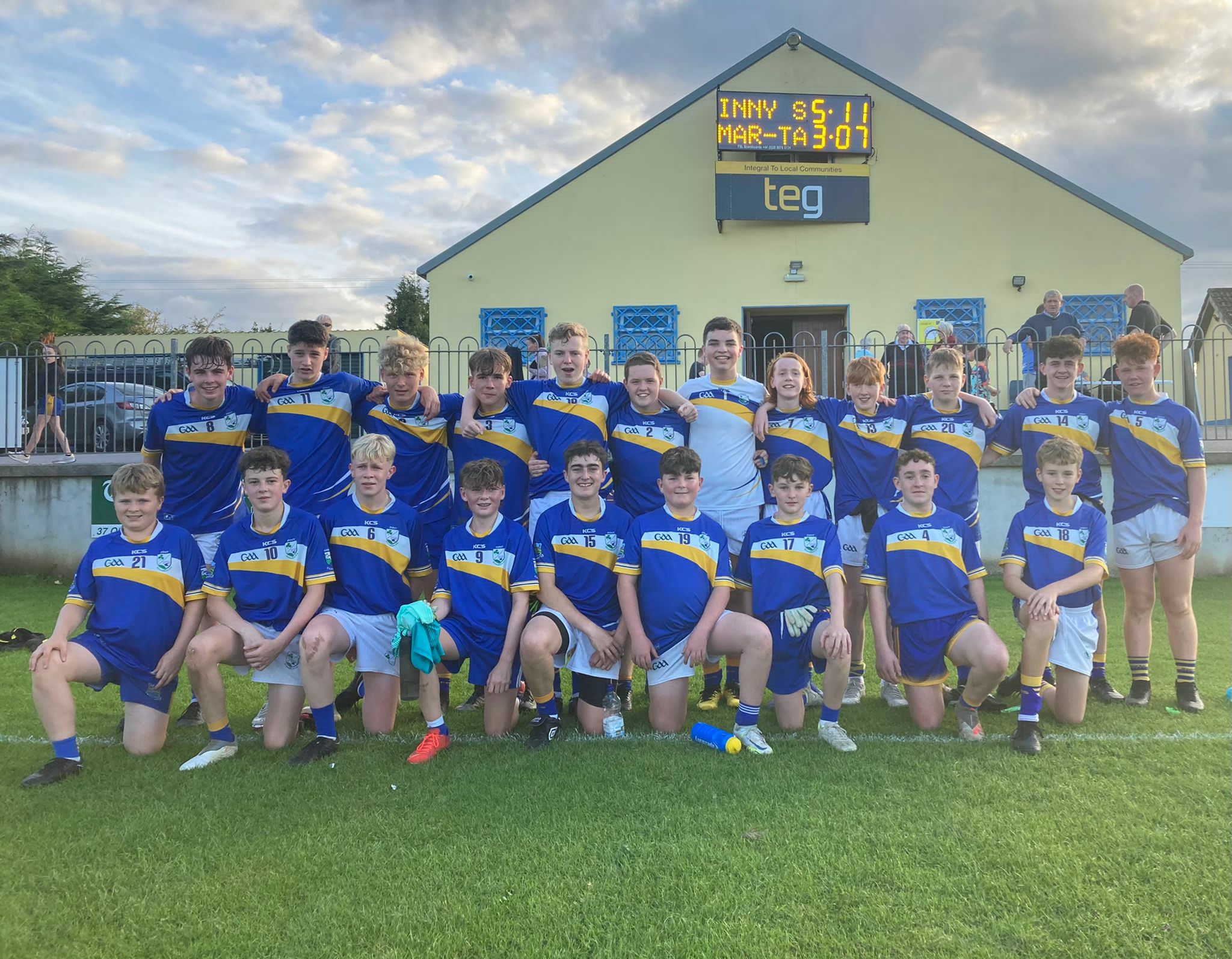 We played Mullingar Shamrocks in Ballymore on Saturday last in the Quarter Final of the Championship. Before throw in, a minute silence was observed for the two children who tragically lost their lives on Friday evening. Given the tragic circumstances, football felt very unimportant.

The game got off to a frantic start with both defences on top from the outset with numerous turnovers being a feature from both teams. Aidan Finnan strode forward to kick a point after great work between Caolan Fulham and Barry O Mara.

Shamrocks took control of the game for the next 15 minutes and kicked the next three points after putting together some good moves. Bun got a stranglehold on proceedings after this and points from Barry O Mara (2) and Peter Tormey saw us retake the lead. Shamrocks responded in typical fashion when they levelled after good work from their defence in turning a Bun attack over.

Bun then had a great goal chance saved from the Shamrocks keeper, Mikey Curley, before good scrambling work from Kevin Mitchell and Kenny Conroy enabled Tormey to apply the finish to leave Bun 0:05 to 0:04 ahead at half time.

The second half started with Bun in resolute fashion. Conor Lyons caught the throw in and burst forward to set up an early attack. This set the tone for what was to follow from the team throughout the second half. Peter Tormey has our first point of the half after some great work from Shane McGovern.

Shamrocks responded with a point from play to cut the deficit to one point again. John Kiernan then made a great break up the field after combining with Whitney before continuing into the Shamrocks half to offload to Tormey who supplied the finish.

Kevin Mitchell, who worked tirelessly throughout, then kicked a great score from play after more good work from Bun’s defence in halting a Shamrock’s attack. The introduction of Darragh Lyons proved significant and he kicked a fine point from play after some great work by sub Eoghan Murray and Barry O Mara.

Shamrocks then hit a purple patch and had two quick points in reply, the second a glorious point from Donal O Donoghue with the outside of his left. Lyons would follow this point with a great mark from 40 metres to extend Bun’s lead to two. Shamrocks brought the game back to one point before Bun grabbed hold of this game.

Darragh Lyons found Mark Donnelly in space to kick a point before Shane McGovern bound forward to kick a great point off his left. O Mara then kicked two quickfire points, the second after being set up by Tormey.

Bun defended resolutely for the final ten minutes of this game. A great block from sub Joe Tormey was the highlight of this defending but in truth all the players put their shoulders to the wheel and worked hard for each other. Shamrocks did get a goal from a fine strike to bring the game back to two points but it would prove to be the final action of a good, tough battle.

We now play a Semi Final in two weeks time.

Congratulations to Inny Shamrocks U15s who have qualified for Championship Final after a great win over Maryland Tang on Saturday evening last. Well done to all the lads. It was a hard battle against a very physical team. They all played very well.

Best of luck to both teams.

Our Gaelic 4 Mothers & Others took a well earned break over the Summer but will be returning to the pitch on Mondays at 8pm for a 6 week block before they finish up for this year. We look forward to welcoming back our current players and any new faces that may be interested in giving it a go. For more info contact Sinead on 0877672529

Westmeath Sports Partnership are commencing an eight week Couch to 5KM programme on Wednesday 27th September. This is suitable for complete beginners and will be on from 7:00-8:00pm. Cost- €10. All are welcome.

We wish a speedy recovery to Brian Maguire who suffered an injury in training during the week. We hope to see him back on the pitch in the near future.

All at Bunbrosna GAA wish to offer our deepest sympathies to the families of those involved in the tragic incident in the locality on Friday evening. As a mark of respect all Underage training for boys and girls were cancelled at the weekend. Ar dheis Dé go raibh síad.

We also offer our sincere condolences to the McGowan family on the sad passing of Pat McGowan late of Grange, Ballynacargy, Co. Westmeath and formerly of Foxford, Co.Mayo.

No winner of Club Lotto on Sunday. Numbers drawn were 6, ...