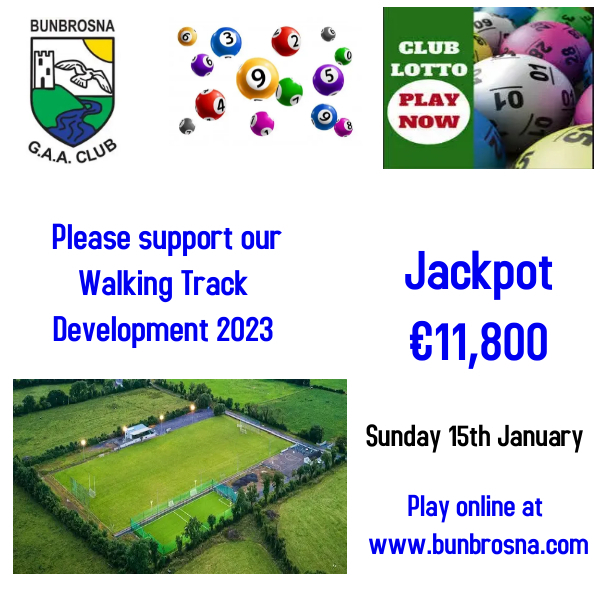 Bunbrosna AGM took place on Sunday last in Tormey’s Pub. Following last year's online AGM, we made a welcome return to an in - person AGM. Our Chairman, Peter Maguire, opened the meeting with a minute's silence for deceased members of the club during the year.

Ken Conroy then gave a detailed account of the club's year both on and off the field. He detailed the adult teams' run to the Junior Final for the second year in succession and commended all involved in supporting the team in their run to the final as well as acknowledging the great effort and commitment of the players and management. Eight players made their debut for the Bun Adult team this year which is testament to the great ongoing work of our underage structures.

We were then given a comprehensive review of the year from Peter Maguire. This was a very busy year for the club beginning with the underage registration day in February and ladies fitness classes with Kate Brennan. Anthony Maher, Tommy Kelly & Finian Newman were appointed as Adult Team management for the year. Peter remarked on the contribution of Rachel Quinn nominating the club for a competition of a free solar panel which was fitted on the Old Club House in August.

Peter thanked all involved in the ongoing development of our underage academy and remarked on the great work being done by so many in this area. He praised the great work in a number of our underage teams reaching finals this year. The Instrumental Musicians were also complimented for winning the Scor na nOg County Title.

Peter complimented our footballers on reaching the County Final again this year. This was a collective effort and while the result didn’t go the way we would have liked, everyone in the club is extremely grateful for the players and management efforts.

Peter then went on to thank all who helped out with the Royal Run to Bun and the Cycle Home for Christmas fundraisers run by the club during the year. He thanked O’ Reillys and Geerah’s for allowing us permission to hold a fundraiser on their premises during the year. Thanks were also extended to all our sponsors who supported us during the year.

Peter paid special tribute to the St. Stephen's Day fundraiser in aid of Lucy Thomspon and Ciaran Kilmurray which raised €1,700. Lastly, Peter congratulated all those who got engaged, married or had children or expecting children in the coming months.

Colm McCormack, Treasurer, was absent from the meeting but provided us with a detailed and thorough report of the club's accounts. This report highlighted the great work being done in the club to develop our facilities and the investment that has taken place on the same.

Conor Newman, Underage Co Ordinator, reported on the underage development in the club and the growing numbers at this level which is wonderful to see and testament to all the hard work of all our coaches.

Conor paid a special thanks to all our underage sponsors throughout the year. He also paid special mention to the various teams which reached finals this year which is testament to the players talent and enthusiasm as well as the great work put in by the coaches.

Two of our underage teams represented the club at the Go Games in Croke Park during the year. This was a fabulous occasion for our LGFA team and our boys U10 team. All involved enjoyed a great day out playing on the hallowed turf at national headquarters.

We then had a report on Rounders. Valerie Molloy was unable to attend the meeting but provided a detailed report on the year gone. Numbers are growing at underage and Adult level and as always are open to new members. Rounders has been running for five years in the club and this was praised by all. We hosted All Ireland Series matches at Underage and Adult level this year.

Chris Cole then provided a detailed report on Registration. He outlined the growing membership at underage level which is testament to the great work being done by all involved at underage level. Rounders, LGFA and boys underage are seeing an increase in numbers and it is hoped that this will continue for next year.

38 players togged out for our Adult team at various stages of the year for Bun which is great to see. Chris emphasised the importance of all players paying their membership in order to be covered by insurance.

The election of officers for Bunbrosna GAA 2023 are as follows:

Well done to Shane McGovern who lined out at midfield for the Westmeath Senior Hurlers against Galway in the 1st Round of the Walsh Cup on Sunday. He even managed to score a point from play but sadly, Westmeath were defeated in the end after a battling display.

Congratulations from all at the Club to Garvan Dolan and Sarah Tormey on the birth of their son, Seánie, earlier in the week. We wish you all a lifetime of health and happiness together.

All at Bunbrosna GAA wish to offer our sincere condolences to the Murray family, Kinnegad, on the tragic passing of Colm on Monday last.

To his parents Eddie and Helen, his sister Therese, uncles, aunt, extended family, friends and his team mates at Coralstown/Kinnegad G.F.C and RAHARNEY HURLING CLUB, we offer our deepest sympathies to you all at this very sad time.

All at Bunbrosna GAA were deeply saddened to learn of the...